Long before I threw caution to the wind and (as a mum with 2 small children) began my part-time PhD my Professor Andy Gale (@AndrewWGale) gave me a very wise piece of advice “Don’t be afraid of a PhD, it’s really just a project”.  As a new academic who had previously enjoyed a career as a project manager in industry (and one whose last serious academic study had been 10 years previously) I found these words both reassuring and encouraging. Now that I am entering the 3rd year of my part-time PhD I want to reflect on the similarities between a PhD and a project and offer some tips on how to use the tools and techniques of project management to make sustained progress in a research degree.  I will share these lessons in two successive blog posts as there is a lot to cover – Happy reading!

A PhD is indeed a project, albeit an uncertain and often lonely one

Most definitions of a project would agree that projects have a beginning, middle and end; they are temporary endeavours that utilise resources (people and equipment) to achieve a specific set of objectives and projects often, but not always, deliver something novel or new.  These generalised definitions cover myriad real life projects – from the design of a new IT system for a company, the management of the London Olympics, the production of a TV documentary or the setting up of a new community venture such as a Job Club or Debt Counselling Service. Indeed projects are everywhere!

On first reflection the above projects do not appear to have that much in common with the typical research degree – but think for a moment – A PhD has a beginning, middle and end (registration, period of study, graduation), it utilises resources (the student, supervisory team, libraries, IT or laboratory equipment to name but a few) and its raison d-être is the pursuit of new knowledge.  So in my book a PhD is absolutely a project!  There are of course some nuances of a typical PhD that are not that common in the majority of projects – for example projects are usually completed by a team rather than an individual and the project objectives in most (but not all projects) tend to be reasonably well understood. However I would argue that there is much the novice PhD student can learn from the discipline of project management.

Its okay to feel “Lost in the Fog”

Eddie Obeng– a project management professor, author and speaker helpfully classifies the vast and diverse landscape of projects into 4 basic project types, depending on how clear we are what is to be done in the project, and how clear we are over how to do it. His 2*2 matrix is shown here: 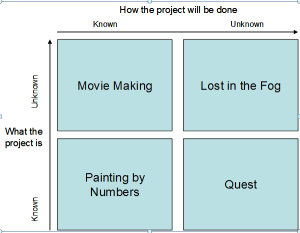 Projects where both the “what” and the “how” of the project are well-articulated are called “Painting by Numbers”.  In an educational context such a project might be the completion of a particular piece of coursework.  Here the assignment brief is usually pretty comprehensive, a detailed marking scheme is available and the approach required to complete the assignment is well understood.  Projects where the “what” is clear but the “how it will be achieved” is not are known as “Quests”.  For example, the university executive team wishes to reduce university costs by 10% over the next 2 years – but these savings could come from a variety of means, headcount reduction, selling off unused estate, purchasing efficiencies etc. It is likely that several parallel investigations would occur in this project with the aim of establishing the optimum method of achieving the required cost savings.

Conversely projects where the “how” is well understood, but the “what” is unclear are labelled “Movie Making”.  Such a project in Higher Education might be a large bid for research funding.  Here the researchers are likely to be well versed in the methods and approaches to writing bids, but the actual outcome of the bid may be much more uncertain. Indeed an enormous amount of effort from a significant number of individuals can be expended on the bid writing, with no guarantee of eventual success in winning the funding.

The fourth and final type of project is “Lost in the Fog”. These rather scary sounding projects are rarer beasts in the corporate and academic world, and involve an organisation undertaking a radically new activity, or pursuing a new strategy. Obeng argues that the “secret of success in these projects is to proceed very carefully, to proceed one step at a time” (All Change! The Secret Project Manager’s Handbook) It strikes me that, at least in the early days, most PhDs are akin to “Lost in the Fog” projects.  Indeed I have experienced many moments when I felt utterly adrift in my research, unable to articulate what I am trying to achieve or how I am going to go about it.  My supervisors and academic colleagues reassure me that this is completely normal in a PhD. At such times the only thing to do is to keep working.  Keep reading, thinking, talking – just keep going – sometimes for weeks or months at a time.

The supervisory team becomes of vital importance when you are lost in the fog.  My colleague Dr Therese Lawlor-Wright (@Therese_LW) likens the PhD supervisor to air traffic control. As a PhD student, you are on a journey, it’s your flight, you are the captain, you may be flying through fog but it is helpful to be in contact with some people on the ground. They know your route and where you are headed, have a different perspective and are familiar with other journeys. Like all flights, take-off and landing probably need the most attention and support.  Sometimes the fog doesn’t lift until the final minutes when you suddenly see the runway and the landing lights and it’s all lined up perfectly!

In most cases though the fog does not persist indefinitely; it eventually tends to disperse and just like larger projects the PhD will gradually mutate from a “Lost in the Fog” type to a more optimistically sounding “Quest” as you start to define the research questions and explore the different methodological approaches at your disposal. The latter stages of a PhD (I haven’t got there yet) will hopefully be closer in form to a “Movie Making” project where the methodological approach is agreed, and you know what to do to get to the finishing line of thesis submission, even if the final shape of the finished thesis remains something of a mystery – often until the few weeks preceding submission.

Some people are planners and some are not.  It all goes back to our personality type according to Myers Briggs.  I out myself now as a planner – with “to-do” lists and plans an essential part of my professional and personal life.  Plans enable me to keep control of what needs to be done, know in advance when things need to be dealt with and avoid my tightly-coupled, highly-complex family and work life collapsing around me.  Even if you are not a natural planner I would argue that there are a number of benefits of maintaining some form of plan of work for at least the next stage (say 6 months) of your PhD.

So go on, spend the next hour or so drafting a plan of action for the next six months of your PhD – it’ll be time well spent!

That’s the first two lessons from project management for PhD students.  Next time I’ll talk about three further tips. How one of the biggest barriers to success is lack of clear scope in a PhD, dedicating resource to the project and the importance of good project communications.

2 thoughts on “A PhD as a project”