This semester I came back from a refreshing and highly productive six month sabbatical to a maelstrom of teaching activity and my first proper management role within my department.  As is often the case within academia, the role was new and ill-defined.  It involves enhancing teaching quality (whatever that means)  across 40 undergraduate and postgraduate units delivered by 18 academics .  Three months in, I wanted to share some reflections on how I am adapting to my new management responsibilities.

In my view, management responsibilities in academia are akin to a medieval game of football.  There are few rules, many hundreds of players,  several often conflicting objectives,  and pretty ineffective levers of control.  So, here are some strategies for playing the game….. 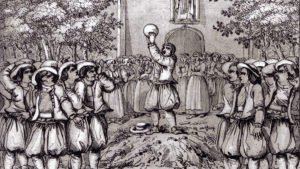 1. Don’t take yourself so seriously, nor your victories or defeats personally.  Indeed, you can pick yourself up from even the most crunching tackle  and be quickly back in the game ready for the next move.

2. Don’t try to understand the game, nor the size and complexity of the pitch on which it is being played.  It is simply too vast and the players too multifarious.  Instead, narrow your efforts to the small group of players that you can influence and encourage to play as a team, and kick the ball in the approximately direction of the goal.  It is possible to put together small and skilful moves, yet highly unlikely you will ever win a decisive victory.  Nor are your efforts likely to result in a terminal defeat which is of some reassurance on those bad days.

3. You can stay sane, knowing that before long new players will join the game, the goalposts will shift, new priorities will emerge etc.

4. Get some training.  Academics are well trained in how to analyse familiar, if complex data sets, but management is about dealing with an emerging future with uncertain data.  You need to learn to play what is in front of you.

5.  Get out of the game on a frequent basis.  We all need recovery time, and to gain points of reference that will make academic life seem less overwhelming and more manageable.

6. And finally remember that within the vastness of the game there is plenty of scope for freedom – for pursuing your own intellectual interests without too much interference. There are not many careers where one can say this!