The holy-grail of assessment in large class HE teaching, IMHO, is finding an assessment process that is in equal measure meaningful, equitable to students and manageable for me as a busy academic. 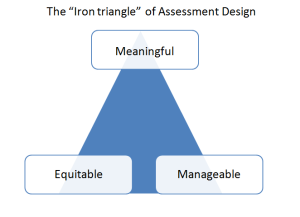 I have blogged on this topic previously, and a couple of years on I want to share my experiences of moving my coursework from individual to group-work on a large international post-graduate taught module.

In previous years the coursework element of my MSc unit on  Project Finance for Infrastructure has typically comprised an individual essay with a strict 6 page limit (including all references, diagrams etc) on a topic which requires students to critically appraise the theories of project finance and to compare them with what happens in practice on a real project case study.  Although I had a brief dalliance with a group based wiki assessment in 2009, the technological issues that arose had me retreating to the safety of a word based individual essay in 2010. This academic year (2014/15) I decided that enough was enough. My rationale for moving to group-work was largely pragmatic: I wanted to reduce the burden of marking, yet try to ensure that the assessment remained meaningful and equitable.

Here is what happened and what I have learned from the process.

Because this unit is taught to postgraduates, I allowed students to select their own groups in which to work.  The coursework is worth 30% of the unit assessment and comprised a 10 page written analysis of a real large-scale infrastructure project. Students select their own case study to investigate with the only proviso being that it must not be one that we have studied in class already. Students were asked to sign up to groups within the Virtual Learning Environment (Blackboard 9) before the end of week 4 of the semester.  This meant that there was no rush to sign up ; indeed the groups were not visible to students until week 3. I was reassured that 95% of the class of 200 managed to arrange themselves into suitable groups and I was left with only two groups of stragglers to assign to groups (late arrivals, students who had not understood the sign up process, or had remained in blissful ignorance of the need to sign up,in spite of it being discussed in each of the first three weeks lectures!).

Usually I am deluged with student queries about the meaning of the coursework brief, how to address its demands, what font size to write in etc, in spite of all these things being clearly addressed in the Coursework Brief. This year I had a significantly lower number of emails and discussion board posts on coursework queries.  Maybe, just maybe, students worked in their groups to resolve their initial coursework queries, rather than jumping straight to an email to the lecturer.

Due to the requirement for all submissions to pass through Turnitin plagiarism detection software, we had to set up two submission tools – one in Blackboard and one in Turnitin. Each group therefore had to submit their completed coursework twice. Instructions on how to do this were clearly provided in the coursework brief, but nevertheless a minority of students failed to upload their coursework twice and in some groups all 4 students submitted a copy of the group coursework, which unfortunately played havoc with Turnitin’s similarity index.  I gave these students the benefit of the doubt, but I was niggled that some groups may have done this deliberately in order to mask plagiarised work (perhaps I am getting cynical in my old age!).  Other than these minor issues the submission process worked well and our amazing resident eLearning technologist -Francesca Demontis- downloaded all the submissions to a zip file to allow me to mark offline and mostly at home.

This was much, much, much easier than in previous years. My marking burden was almost halved (saving me about 25 hours of marking).  I hope I gave better feedback and I actually enjoyed reading many of the submissions.  The longer format of the group coursework also enabled me to better differentiate between well researched, theory rich submissions and those which were weaker, largely descriptive reports. The distribution of marks ranged from 81% to 40% (pass mark is 50%) with a mean of 59.7% and a standard deviation of 8.66.  So far so good – the group coursework certainly helped me deliver an assessment which was meaningful for students and manageable (for me to mark) but was it equitable to all students?

1. There were, as was to be expected, groups that did not work well, but there were only two of these out of almost 50 groups.  Unfortunately these problems were not brought to my attention until after the submission deadline in one case (an argument over the distribution of peer assessment marks) and 48 hours before the submission deadline in the other case ( a last minute change to the selected case study) so my ability to intervene was highly constrained. However both these two groups learned a hard, but valuable lesson in the challenges of team working and the importance of picking the right team members in a project. I actually think I got off pretty lightly in terms of group problems given that this is a highly internationalised cohort (over 30 nationalities, 85% non-native English speakers and the majority unfamiliar with the UK Higher Education system) and this would not put me off doing group based coursework in the future.

2. Judging by their final submissions, a number of groups did not work as teams in any performative sense. Rather they subdivided the coursework brief into four equal sections and worked almost independently on their tasks, only coming together at the end to upload their contribution to the final document.  This is a real shame as these groups lost the opportunity to gain experience in team working.  However the blame lies partly on me for not designing in, or paying sufficient attention to how teams work and adding incremental team building activities to the coursework brief.  This is something I am currently reflecting on and will look to enhance in next years’ coursework.

Overall though, my experience of moving to group based coursework was a very positive one and definitely a step closer to my holy grail of assessment design

Is your experience of group work as a student or academic similar to mine ?

How do you ensure your assessments are meaningful, manageable and yet equitable given the specific challenges of large class teaching?

2 thoughts on “Moving from individual to group based coursework”